Sure, the product you’re buying may be interactive, but did you know its packaging can come to life too? In prior weeks, we’ve covered interesting (and just plain awesome) designs—this week, we’re taking it a step further. Box designs are getting more and more innovative, and we’d like to share with you the unique world of augmented reality packaging.

The idea of augmented reality packaging has actually been around for several years. Take, for instance, this line from Pepsi that hit shelves towards the end of 2013. This is Blippar, an augmented reality advertising platform for tablet and mobile devices. It can turn an ordinary can of Pepsi (observe):

Into something a little more exciting: 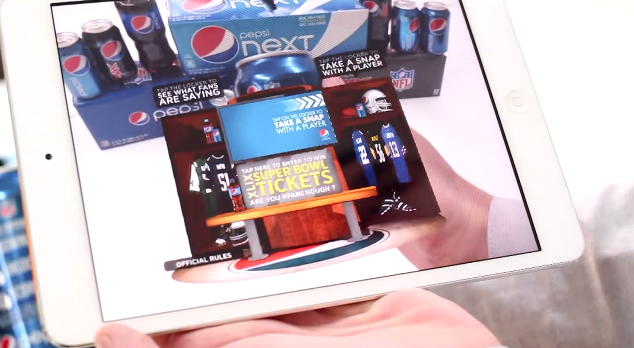 A quick scan of your soda brings up a responsive digital interface. I’d suggest watching the video (since it’s really freaking cool), but I’ll explain it to you here if you’re not sold yet. The above image scales and rotates as you move the can, and animated portions fly on and off screen. It’s interactive, so you can tap on sections you find intriguing to learn more. Pepsi’s advertisement was superbowl related, so you could enter a sweepstakes, learn about your favorite players, and even pose for a picture ‘with’ them (by which I mean it will superimpose an image of the player onto your camera interface).

Integrating augmented reality into your products is a cool and flashy way to amp up your marketing. Since they’re interactive by nature, you could even trigger games to come up upon scanning (Blippar previously launched a platform for augmented reality games compatible with Google Glass). There’s also movie trailers, playlists, hidden text; this type of innovation in packaging opens up a realm of possibility.

The technology has been around for several years, but it’s been getting more and more immersive over time. With the growing popularity of virtual reality headsets and thermal imaging technology (turning literally everything into a touch screen), I’m really excited to see where the world of augmented reality marketing goes.